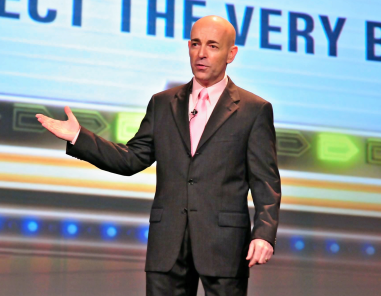 Steve Rizzo shared the stage with Jerry Seinfeld, Rodney Dangerfield, Ellen DeGeneres and many more. But his personal journey took a completely new path when he found his career passion wasn’t for the trajectory in which he had spent years climbing the ladder of success in.

In early 2013, Rizzo released his “Get Your SHIFT Together” book to rave review. In it Steve shares his story and “How to Think, Laugh, and Enjoy Your Way to Success in Business and in Life”.

This month in an exclusive excerpt for atWork, Steve tells of his time with a rising star, Eddie Murphy.

One Saturday night in 1980, I was performing at East Side Comedy Club on Long Island. I was fairly new in the comedy arena and this was my first weekend appearance at a premiere comedy club. To say that I was a bit nervous would be an understatement.

Sharing the marquee with me was a young comic by the name of Eddie Murphy. Yes,the Eddie Murphy. I knew Eddie pretty well back in the day. We performed at a lot of one-night gigs together, at bars, at dance clubs and restaurants in the tri-state area. Even though I was 12 years his senior, I knew from the moment that I met Eddie that there was definitely something special about him. He always stood out from everyone else. Besides being brilliantly funny and having a great stage presence, he had an air of confidence on and off stage that was unusual for someone barely 18 years of age.

After the first show, Eddie and I were in the green room talking about what we wanted to do with our lives. At the time, I was an English teacher during the day and stand-up comedian at night (although sometimes I had difficulty distinguishing between the two). I told him my dream was to break into the comedy business in a big way. Then Eddie said something to me that I will never forget.

“Steve,” he said, “I’m going to be to comedy what the Beatles were to music.”

He didn’t say, “I would like to be,” or “My dream is to be.” He said it as if it were a matter of fact. “I’m going to be.” He wasn’t bragging and it wasn’t his ego getting carried away. There was no conceit at all. His demeanor was calm and assertive.

It was a simple statement that came from his heart; he said it with such conviction and utter certainty that I had no choice but to believe him.

I’m sure you’ll agree that there are many extraordinarily talented people in all walks of life who never achieve the level of success they desire and/or deserve. You probably know a few personally. Have you ever wondered why? They seem to have what it takes to succeed, but somehow, for whatever reason, they never get that lucky break.

Back to Eddie Murphy. At that time in television history, the original cast of Saturday Night Live retired and there was a search for a black comedian or actor with improvisational skills to replace Garrett Morris. A comedian was quickly chosen, but the producers discovered that this person unfortunately had difficulty reading and writing. So another more urgent, casting call was put out.

At the time there were only a handful of black comedians and Eddie was one of them. Auditions were being held at The Comic Strip in Manhattan and as the story goes, within minutes of Eddie stepping on the stage, the powers that be were convinced that he was going to be the newest prime time player on SNL.

Now you can call Eddie Murphy’s rise to fame luck if you want to. But I believe we make our own luck. In other words, what you think is what you get. We manifest the things we desire in our lives with the power of our thoughts.

If you are continuously creating positive thoughts and focusing your attention on the things you desire, if you take action with joy, passion and enthusiasm, and believe without a doubt that it is just a matter of time before you achieve your desires, then more than likely that is exactly what will come to pass.

Take note the key phrases to remember are “creating positive thoughts,” “taking action with joy, passion and enthusiasm,” and “believe without a doubt.” I know. It’s easier said than done. Don’t give me that look. The good news however, is that it can be done. 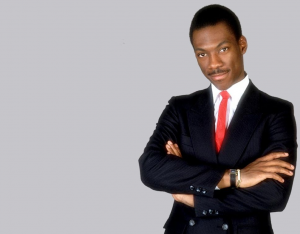 Eddie Murphy is a prime example of “what you think is what you get.” I’m certain he achieved his level of success because he truly believed he was a star long before he became one. It was as if he had a crystal ball and saw how his life was going to unfold. It was just a matter of time before his determination to succeed would manifest in the physical world.

I witnessed firsthand how he carried himself on and off the stage. I had many heartfelt conversations with him. His focus on his craft was laser-sharp. His attitude was unfaltering. And his passion was second to none. He never drank alcohol or did drugs – never. His high was the joy he received from being on stage and making people laugh.

I believe that Eddie Murphy radiated so much positive energy and had such a powerful subconscious belief in himself that he attracted what we call lucky breaks into his life. He just happened to have the talent and fortitude to take the appropriate action to seize opportunity when it knocked on his door.

What really separated Eddie Murphy from other talented comedians, myself included, was that Eddie really, really wanted to be to comedy what the Beatles were to music. I mean, really! And he truly believed it was possible. When that combination of desire and belief comes together, it is unstoppable.

Eddie always knew where he was headed before he got there.

More importantly, there was a constant correlation between his intention, his thoughts and what was manifesting in his life.

You can’t attend one of Steve Rizzo‘s keynote speeches, seminars, or read his books and leave with the same attitude. He’s a personal development expert, comedian, motivational speaker, and author. His popular PBS special brought him into millions of homes. It’s no surprise that he’s been inducted into the Speakers Hall of Fame, an honor bestowed upon on fewer than 200 speakers worldwide since 1977.

Steve has shared the stage with Jerry Seinfeld, Rodney Dangerfield, Eddie Murphy, Ellen DeGeneres and many more. His personal journey to success took a new path when he found his passion was in helping others be more joy-filled and positive in their day.

In 2013, Steve released his book Get Your SHIFT Together to rave review. In it Steve teaches “How to Think, Laugh, and Enjoy Your Way to Success in Business and in Life”. Steve honoured us with excerpts.

During this time, Email or Live Chat is best!